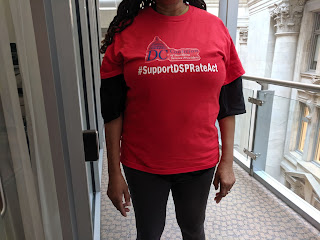 The D.C. council’s committee on human services and committee on health co-chaired a joint hearing on June 13 to consider Bill 23-214, “Direct Support Professional Payment Rate Act of 2019.”  This bill arose from the conclusions of a working group that has been looking at DSP pay and retention issues over the past year.  At this time DSPs must be paid the D.C. living wage, which any organizations receiving $100,000 or more in contracts or assistance from the D.C. government must pay their employees.  However, by July 2020, D.C.’s minimum wage will reach $15.00 and catch up with the living wage.  With little (now) or no (by next year) differential between the two wage rates, there will be little incentive for people to assume the arduous work of being a DSP rather than taking a far less demanding minimum-wage job.  In order to address this, the bill - co-sponsored by councilmembers Nadeau (human services committee chair), Gray (health committee chair), Silverman and Grosso - recommends adoption of a tiered wage system for DSPs ranging from 110% to 125% of the D.C. living wage.  Here is a summary of the bill - https://tinyurl.com/y33t88yl.  (I have not yet located a copy of the actual bill.)

The D.C. Coalition of Disability Service Providers (http://dc-coalition.org/), as well as many individual service provider agencies, DSPs, people receiving support, family members and others turned out in support of the bill, with more than 40 people testifying in favor.  Supporters pointed to the fact that neighboring jurisdictions in Maryland have established DSP wage floors above the Maryland minimum wage.  (The Maryland state minimum wage is currently lower than D.C.’s, but Montgomery County already is supporting a DSP pay rate of $15.00, above the current D.C. minimum wage which will go to $14.00 on July 1.)  They also discussed the difficulty facing DSPs who want to live in D.C. as opposed to the far suburbs – according to a 2018 report by the budget director of the D.C. council (https://tinyurl.com/y5hvbkot), the actual cost of living for a single adult living in D.C. would require an hourly wage of $17.78 per hour, and many DSPs must hold at least one other job in order to make ends meet.  A key argument made was that vacancy and turnover rates in D.C. are higher for DSPs than in neighboring jurisdictions.

Speaking for the D.C. government, deputy mayor and director of the Department of Health Care Finance Wayne Turnage and DDS director Andy Reese argued that  the National Core Indicators (https://www.nationalcoreindicators.org/) do not show the same numbers for DSP vacancy and turnover rates as those cited by the Coalition and other supporters.  They went on to say that singling out DSPs as worthy of a higher pay rate than similar care providers such as home health aides and personal care assistants would not be defensible and that the pay raise, if enacted, would need to be extended to others, meaning higher costs.  They said providers are able to pay DSPs at a higher rate now if they want to and can justify the costs.  They further said that self-direction, which DDS plans to introduce next year, will provide more flexibility in this regard.

Government representatives are always going to argue for budget restraint.  It’s what they have to do.  For me, though, what’s true without a doubt is that DSPs can’t support themselves, much less a family, living within the boundaries of D.C.  Do we want D.C. providers to keep having to reach further and further out into the suburbs for DSPs who have to drive 10 or 15 miles to get to the people they support?  In the end, what the deputy mayor testified may also be true – these same benefits may need to be extended to other groups of care providers.  But doesn’t that just show that we don’t yet have a living wage in D.C.?

This was an amazing event at a great many levels, including the fact that this is the first time in the past decade that I recall sitting in a hearing on legislation about which local advocates and DDS were on opposite sides of the issue.  This is a sign of maturity in the D.C. disability community, and it was exciting to see how many folks turned out to testify.  I hope that people will stay just as motivated as we move ahead to create a system of disability supports in the District that is equitable and rights-based for everyone.

And there’s still time on this bill – written testimony can be provided through June 26 at humanservices@dccouncil.us.  Let your voice be heard!

Posted by Carol Grigsby at 9:39 AM

Email ThisBlogThis!Share to TwitterShare to FacebookShare to Pinterest
Labels: Advocacy