A Passing Grade for DDS


I shared my written testimony with the Council yesterday, text below.  You have until tomorrow to do the same -

Councilmember Nadeau and other members of the Human Services Committee –

My name is Carol Grigsby.  I serve on the D.C. State Council on Developmental Disabilities as well as on the board of the Quality Trust for Individuals with Disabilities, and I blog regularly on issues affecting D.C. citizens with developmental disabilities at https://DDinWDC.blogspot.com.  My son receives waiver supports in D.C., is active in Project Action!, and, I hope, will someday soon be willing to testify before you himself.

I would first like to thank, and congratulate, the committee and the council for having given unanimous support to B22-0154, the Disability Services Reform Amendment Act.  This reform was long overdue, and along with closure of the Evans case, the lifting of the requirement for civil commitment demonstrates that the Department on Disability Services no longer requires court oversight in order to do the right thing for persons with developmental disabilities.  It is now incumbent on DDS and those of us who advise and advocate alongside the agency to ensure that people such as my son receive the right level and type of support from those who care for them, and also have solid recourse when, for whatever reason, the quality of their services goes awry.  I look forward to working with others to see that this is the case.

As I have said in earlier testimony, I fully support the establishment under this bill of Supported Decision Making agreements as a new and less restrictive alternative to guardianship.  However, the availability of SDM agreements must not become grounds to deny those who wish to do so the right to sign powers of attorney, as you or I can.  As Andy Reese stated in his testimony, “People with disabilities can make their own decisions and they have an inherent human right to do so.” This should include the decision to conclude powers of attorney.

With respect to the recent realignment of the Department on Disability Services, I understand and fundamentally support the director’s aim of streamlining and consolidating DDA and RSA shared services.  However, in doing research for my blog I heard a number of concerns that will deserve careful attention in the months to come:

-          The exit of a number of experienced individuals, particularly though not exclusively from the incident management unit (some also noted that the exit of qualified women from influential positions appears to be a step away from diversity)
-          The consolidation of the DDS intake unit under the RSA deputy director rather than centrally under the DDS director or reporting to the DDA deputy (unusual given that determining waiver eligibility is a more time-consuming and complex process than is eligibility for vocational rehabilitation services)
-          The need to recruit promptly for the DDA and Quality Performance Management deputy director positions (as was noted in the hearing as well) in order to ensure stability and leadership at the highest levels of the organization.

I hope that the council will keep close watch on these and other aspects of the realignment to ensure it achieves its desired goals without creating others.

In my testimony last year I wrote at length about the progress that DDS still needs to make in assisting people to achieve competitive employment.  This remains a challenge, as my son’s experience over the past year has continued to demonstrate.  DDS is moving in the right direction and showing incremental progress, but much more rapid movement is needed in identifying partnerships, incentives and other creative and customized approaches to expand employment opportunities for people with developmental disabilities in D.C. – including part-time opportunities where appropriate. There is still much to do in order to make other parts of the D.C. government join in this effort.  My son is already 25, and for him time is slipping away to get a foothold in the world of work.

Thank you for your attention to my testimony, and for the committee’s conscientious oversight of DDS performance as we head into the budget season.

Posted by Carol Grigsby at 9:26 AM No comments:

Follow-through is Everything, Not Just in the Olympics!


The Valentine’s Day hearing before the Human Services Committee on performance by the D.C. Office on Disability Rights and the Department on Disability Services over the past year took place as scheduled, and you can see it here in full:  http://dc.granicus.com/MediaPlayer.php?view_id=2&clip_id=4349.    The DDS review was dominated by the recent passage of bill B22-0154, and self-advocates in particular turned out to express thanks to the council for its passage of the Disability Services Reform Amendment Act. There also was plenty of discussion about implementing the bill, in particular with respect to the grievance process it establishes, and DDS announced it would be working on this with the advisory group that helped with the recently-approved state transition plan and waiver amendments.  DDS also will be launching, along with advocacy organizations, a process of education and outreach so people will be aware of new rights and procedures under the bill.  DDS director Andy Reese’s testimony addressing this and other subjects, including the recent management reorganization, is here
https://drive.google.com/open?id=1TE-Z20Fp7Xjpem3UjrIoZKK7X0veX0oN
and can also be viewed in the last 45 minutes of the video, along with Q and A.  Here too is the testimony of Morgan Whitlatch from the Quality Trust for Individuals with Disabilities:
https://drive.google.com/open?id=1vBSP1QlgRjKY41g52fkvaI8b4KWxFcVg.

Another topic which received attention in the hearing was the impact of broader D.C. workforce initiatives on the financial sustainability of human services agencies.  These are the folks who hire the Direct Support Professionals providing support to D.C. citizens with disabilities, so the financial viability and livelihoods of these organizations and people are essential.  Ian Paregol, director of the DC Coalition of Disability Service Providers (http://dc-coalition.org/2016/02/19/welcome) gave an excellent overview of the issues (https://tinyurl.com/y8wg5qt3), as did follow-up testimony by RCM (https://tinyurl.com/ya6v8yyu) and NCC (https://tinyurl.com/yaaw6n33), two of the Coalition’s member organizations.  Nadeau announced that the council is setting up a working group to address these and other workforce issues, which also affect care for seniors in D.C.

After reading this post, if you’re inspired to express yourself, the deadline for submitting written testimony to the committee (humanservices@dccouncil.us) is February 28, a week from today.  Keep it short if you want, but let the council know there are folks who care about these issues as they prepare to consider the mayor’s budget for fiscal year 2019 later this spring.

Posted by Carol Grigsby at 2:26 PM No comments: 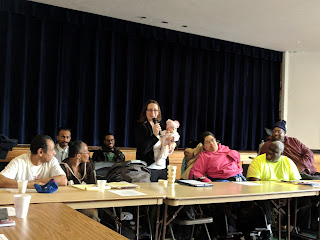 I mentioned in my last post that the chair of the council's Human Services Committee, Councilmember Nadeau (Ward 1), attended the Project Action! meeting on February 10.  Here's the proof!
Posted by Carol Grigsby at 12:43 PM No comments:

Email ThisBlogThis!Share to TwitterShare to FacebookShare to Pinterest
Labels: Advocacy


Today it’s time for some updates because there’s such a lot happening.

The Project Action! (https://www.dcqualitytrust.org/families/join-project-action) meeting on Saturday was a great celebration, as I’d expected.  Self-advocates and others really had put their shoulders to the wheel to get B22-0154 through the council, and the unanimous vote was an amazing accomplishment.  What made Saturday’s meeting even more special, though, was that Ward 1 council member Brianne Nadeau, who chairs the Human Services Committee, showed up with her baby daughter to celebrate along with us and to hear from Project Action! members about other concerns they have moving forward.  With respect to the bill itself, we were also reminded – as if we could forget! – that the U.S. Congress has to get its 30-day review of OUR law before the mayor can sign it.

Next up:  Tomorrow, Valentine’s Day, February 14, will be the performance review of the Department on Disability Services (also for the Office on Disability Rights) before the Nadeau committee.  It starts at 10:00, in room 500 of the Wilson Building at 1350 Pennsylvania Avenue NW.  This year I won’t be testifying in person but I do plan to attend so I can hear what others are saying, in particular about the DDS reorganization.  The committee hearings are always available to watch live or on archived video afterward (http://dccouncil.us/committees), and it’s still possible to submit testimony for a few days after the hearing has taken place.  So keep your eye on this space and I’ll let you know how long you’ve got to submit your written testimony!  Sometime in April the committee will have another hearing to consider the mayor’s budget for DDS.

Another big item on Saturday’s agenda was bill H.R. 620, which aims to weaken the Americans with Disabilities Act and will be considered by the U.S. House of Representatives this week:

Particularly for those of my readers who have a voting representative in the U.S. House, CONTACT YOUR REPRESENTATIVE AND TELL THEM TO VOTE NO ON H.R. 360!  Do it for all U.S. citizens with disabilities, including those in D.C.!

Looking ahead, March 9 is the next meeting of D.C.’s Supporting Families Community of Practice (https://dds.dc.gov/event/state-team-meeting-supporting-families-community-practice-friday-march-9-2018).  You’ll remember that there were two briefings last year about ABLE accounts, one on ABLE in general and another about the newly-created D.C. ABLE account.  I wrote about these in my September 18 blog post, “News, News, News,” and then on October 17 in “Thinking About ABLE,” both of which you can find by clicking on “ABLE” in the Search box over to the right.  It was clear from those meetings that it would help to have some more general briefings on budget basics and responsible money management, so the upcoming meeting will focus on that.  I know that Emily Price (emily.price@dc.gov) will make sure there is a call-in option for those who can’t make it to DDS headquarters (250 E St. SW, next to the Federal Center SW metro station).

Many ways to get involved and keep improving life for our citizens with developmental disabilities in D.C. – take your pick!

Posted by Carol Grigsby at 11:28 AM No comments:

This was a hard slog, a years-long effort, to make the reforms in D.C. disability services that would allow court oversight to end – last year, with the closure of the Evans case, and now, for people with intellectual disabilities receiving support in the future.

This is an amazing accomplishment.  Now we can turn our faces squarely toward the future.

The bill itself is here:
http://lims.dccouncil.us/Legislation/B22-0154?FromSearchResults=true
and you’ll find the brief discussion and vote in the council here: http://dc.granicus.com/MediaPlayer.php?view_id=2&clip_id=4332
between 1:20:00 and 1:30:00.

Watch the short video and celebrate!  I know that’s what folks will be doing at this Saturday’s Project Action! meeting (10-12 Saturday, Feb 10 at the Kennedy Institute, 801 Buchanan St. NE).

Carol Grigsby
You can also find me on Twitter, @DDinWDC! As the mother of a young man who receives supports from DC’s Department on Disability Services, I advocate in support of Washington, DC residents with developmental disabilities. I currently co-chair the Advocacy and Public Policy committee of the DC Developmental Disabilities Council, and I strongly support statehood for DC, where I have lived since 1978. Comments and opinions in this blog are my own!