This past Wednesday, March 27, was a rousing celebration of Project Action!’s 30th anniversary (https://www.dcqualitytrust.org/families/join-project-action/) and Developmental Disabilities Awareness Month (https://www.eventbrite.com/e/celebrating-30-years-of-self-advocacy-tickets-57407281725).  Representatives from Mayor Bowser’s administration and from Councilmember Brianne Nadeau’s office joined a crowd of pumped-up disability advocates at the Department on Disability Services to celebrate and to remind ourselves how necessary it is to take the long view – a helpful perspective this week when the decision to defund, then refund, Special Olympics has been so much in the news: https://www.usatoday.com/story/news/politics/2019/03/28/president-trump-restoring-funding-special-olympics/3302983002/.

This backdrop made the Special Olympics video we viewed (https://www.jointherevolution.org/50-game-changers/ricardo-thornton) that much more compelling.  The Thorntons have so much to teach all of us, but this time around it wasn’t just Donna and Ricardo doing the teaching, but also Ricardo’s late sister Earline, who died while the three were still at Forest Haven and was buried on the grounds o that institution in Laurel, Maryland.  On Wednesday DDS director Andy Reese announced that DDS will name a conference room in her honor as an ongoing legacy.  My imperfect picture captures that announcement: 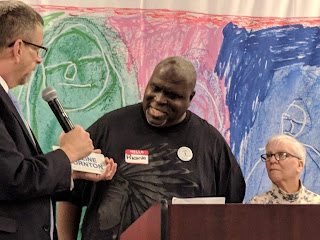 Many representatives of Project Action! were at the event, where the organization handed out tokens of appreciation to a number of their ongoing supporters.  There were many touching tributes, but I especially liked this statement by Alison Whyte, the executive director of the D.C. Developmental Disabilities Council (I may be biased as the new chair!): https://drive.google.com/file/d/1ZMJn1TX0M9Bk90WGGiaaA3fBSa0wiIde/view?usp=sharing

As our community faces upcoming challenges (budget, housing…more to come on those) it’s great, and healthy, to stop and celebrate.

Carol Grigsby dedicates herself to information sharing and advocacy on issues affecting her own son and other citizens with developmental disabilities in Washington, D.C.  She is currently chair of D.C.'s State Council on Developmental Disabilities, as well as serving on the board of the Quality Trust for Individuals with Disabilities and on the Family Support Council of D.C.'s Department on Disability Services.  She retired from the federal government’s senior executive service in 2011 and has lived in D.C. since 1978.  The views in https://www.DDinWDC.com are her own.

Posted by Carol Grigsby at 1:56 PM