I’ve had the good fortune to participate in several important local events this month:

Autism Society of America conference:  I was happy to represent D.C.’s Developmental Disabilities Council at the 50-year anniversary conference of the national Autism Society (ASA).  It was a worthwhile event, with a combination of sessions on important national-level legislation, workplace and education issues, and science and technology updates.  The event was strange in a couple of ways though.  First, in her luncheon address,  Mary Lazare, Principal Deputy Administrator for the Administration on Community Living (ACL) of the federal Department of Health and Human Services (HHS), alarmed many when she seemed to suggest that segregating people with disabilities was acceptable, and she only issued a correction after lots of pushback from many quarters:  https://www.disabilityscoop.com/2018/07/18/talk-segregating-alarms-congress/25296/.  Much less of an issue, but noteworthy for a 50-year anniversary event, was the relatively low turnout with only one day of general sessions followed by an advocacy day in Congress.  Given the similarities in format and the limited attendance, I had to wonder why the ASA didn’t just join forces with other disability advocacy organizations at the Disability Policy Seminar (DPS) in April.  It’s better when we band together, and I hope they’ll consider this next year.

National Association of Councils on Developmental Disabilities (NACDD) conference: Following the ASA conference, I joined Alison Whyte, executive director of our own DD Council, along with other local and national advocates for the final “Days of Dialogue” that closed out the NACDD conference at the National Harbor.  As a relatively recent addition to the D.C. DD Council, for me this event was an eye-opener.  It was very helpful to learn about other states’ approaches to training local advocates and following their post-training progress, and also to hear about some of the advocacy organizations that have been spawned by DD council training nationwide.  Alison was featured to talk about the intersectionality of disability and other issues in our D.C. Advocacy Partners (DCAP) training and the advantages of geography in  D.C.’s follow-up with its DCAP graduates.  Here she is! 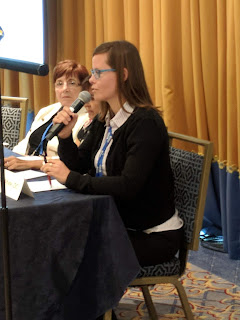 Quality Trust Annual Gala:  And finally, last night was our very own Quality Trust’s annual gala event.  It took place at the District Winery in the newly redeveloped Navy Yard area.  The night was beautiful, food and company were great, and the entire event a huge success.  A great midsummer treat, and Hallelujah! The rain held off.

I wasn’t able to attend the Reinventing Quality (http://www.reinventingquality.org/upcoming/) conference taking place right now in Baltimore, but many folks are there waving the D.C. flag and marking the 28th anniversary of the Americans with Disabilities Act (ADA), signed July 26, 1990.  Much to celebrate!

Posted by Carol Grigsby at 8:31 PM